College debt is having a compounding effect on how millennials perceive and plan for homeownership.

In a recently released report by the National Association of REALTORS® (NAR), eighty-three percent of millennials say they are delaying their home-buying plans by a median seven years as a result of their student loan debt. Twenty percent of the millennials surveyed in the study are homeowners; 80 percent are not. The typical millennial homeowner is burdened by $41,200 in student debt, and earning $38,800 annually.

Homeownership is not the only casualty of student debt—millennials are also postponing career changes, children, marriage and retirement savings, the study shows. Forty-one percent of millennials have put off marriage; 61 percent have skipped a retirement savings payment; and 86 percent have stayed in an unsatisfying job, or taken on a second job or one outside of their field, as a result of student debt. 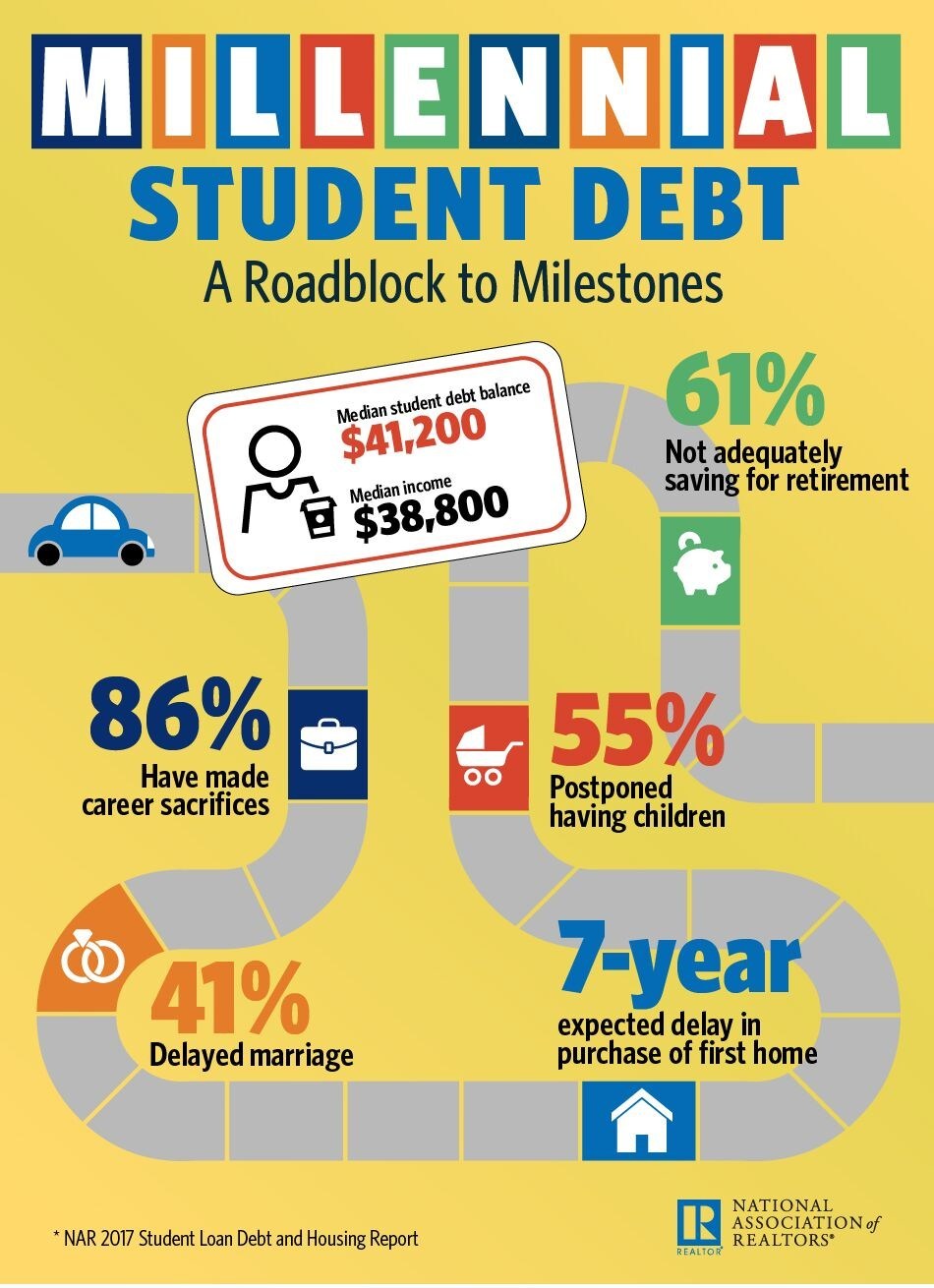 “The tens of thousands of dollars many millennials needed to borrow to earn a college degree have come at a financial and emotional cost that’s influencing millennials’ housing choices and other major life decisions,” says Lawrence Yun, chief economist at NAR. “Sales to first-time buyers have been underwhelming for several years now, and this survey indicates student debt is a big part of the blame. Even a large majority of older millennials and those with higher incomes say they’re being forced to delay homeownership because they can’t save for a down payment and don’t feel financially secure enough to buy.

“Being unable to adequately save for retirement, on top of not experiencing the wealth-building benefits of owning a home, is an unfortunate situation that could have long-term consequences to the financial well-being of these millennials,” Yun says. “A scenario where only those with minimal or no student debt can afford to buy a home and save for retirement is not an ideal situation and is one that weakens the economy and contributes to widening inequality.”

Millennial homeowners are doubly pressured, unable to sell and trade-up due to their student debt. At the entry level, the inability to move keeps valuable inventory off-market, worsening already scarce supply in the tier.

Yun reports, “Millennial homeowners who can’t afford to trade up because of their student debt end up staying put, which slows the turnover in the housing market and exacerbates the low supply levels and affordability pressures for those trying to buy their first home,”.

Combating the issue comes down to education. Many millennials are in the dark about college costs—in fact, the study shows only 20 percent have a big-picture understanding of the expenses related to education.

“REALTORS® are actively working with consumers and policy leaders to address the growing burden student debt is having on homeownership,” says NAR President Bill Brown. “We support efforts that promote education and simplify the student borrowing process, as well as underwriting measures that make it easier for homebuyers carrying student loan debt to qualify for a mortgage.”

The study was conducted in conjunction with American Student Assistance (ASA), a non-profit guarantor.

“Student debt is a reality for the majority of students attending colleges and universities across our country,” says Jean Eddy, president and CEO of ASA. “We cannot allow educational debt to hold back whole generations from the financial milestones that underpin the American Dream, like homeownership. The results of this study reinforce the need for solutions that both reduce education debt levels for future students, and enable current borrowers to make that debt manageable, so they don’t have to put the rest of their financial goals on hold.”