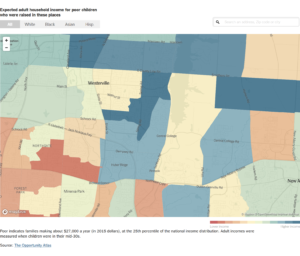 Research has shown that where children live matters deeply in whether they prosper as adults. On Monday the Census Bureau, in collaboration with researchers at Harvard and Brown, published nationwide data that will make it possible to pinpoint — down to the census tract, a level relevant to individual families — where children of all backgrounds have the best shot at getting ahead providing an atlas of upward mobility and a path out of poverty and further guiding parents in their efforts to find a community and a home that offers their children the best chance at future success.

This work, which has been years in the making, seeks to bring the abstract promise of big data to the real lives of children. Across the country, city officials and philanthropists who have dreamed of such a map are working on plans for how to use it. They’re hoping it can help crack open a problem, that being the persistence of neighborhood disadvantage, which has been resistant to government interventions and good intentions for years.

Economists say the study offers perhaps the most detailed portrait yet of upward mobility — and the lack of it. The findings suggest that geography does not merely separate rich from poor but also plays a large role in determining which poor children achieve the so-called American dream.

How neighborhoods affect children “has been a quandary with which social science has been grappling for decades,” said David B. Grusky, director of the Center on Poverty and Inequality at Stanford University, who was not involved in the research. “This delivers the most compelling evidence yet that neighborhoods matter in a really big way.”

Nationwide, the variation is striking. Children raised in poor families in some neighborhoods of Memphis went on to make just $16,000 a year in their adult households; children from families of similar means living in parts of the Minneapolis suburbs ended up making four times as much.

The researchers believe much of the variation is driven by the neighborhoods themselves, not by differences in what brings people to live in them. The greater the number of years children spend in a good neighborhood, the greater the benefits they receive. And what matters, the researchers find, is a hyper-local setting: the environment within about half a mile of a child’s home.

Researchers still don’t understand exactly what leads some neighborhoods to nurture children, although they point to characteristics like more employed adults and two-parent families that are common among such places. Other features like school boundary lines and poverty levels often cited as indicators of good neighborhoods explain only half of the variation here.

Visit www.opportunityatlas.org/ to view the map and it’s data.