Inventory on the rise in central Ohio

The inventory of homes for sale in central Ohio in July climbed to 5,184, a 5.5% increase over June, although still down 5.7% from July 2017. This is the highest inventory of homes listed for sale since last fall according to the Columbus REALTORS® Multiple Listing Service (MLS).

The slight increase in inventory is encouraging for buyers. Buyers are still actively house hunting with both interest rates and home prices continuing to rise. Now is the time for serious buyers to partner with a REALTOR® to get their proverbial foot in the door.

The increase in inventory is thanks to the 3,843 homes and condos that were added to the market in July. July’s new listings were 0.4% more than the same month a year ago, although down 5.6% from June. A downward trend that is quite typically.

Central Ohio sellers recognize it continues to be an excellent time to put their home on the market, with the continued demand and exceptional appreciation, sellers are reaping the benefits of homeownership.

Sales prices continue to rise which reflects the strength of our real estate market and buyers’ desire to achieve the American dream of homeownership.

The June dip is the result of fewer home sales in the upper tier of the market, as opposed to buyers paying less for homes. The luxury market was the first tier of the market to recover and demand in this portion of the market has started to slow this as mortgage interest rates have begun to rise.

The economy is solidly advancing. The anticipated growth rate of 4-5% in the second quarter is remarkable. For the year, the GDP will exceed 3% for the first time since 2005. Employment, like-wise is strong with 5 million net new jobs over the past two years, pushing the unemployment rate down to 3.8%, the lowest rate in 50 years. Wages are up too, by 2.8% over the last 12 months.

There is more good news. Despite recent volatility, the stock market has been close to an all-time high, helping advance combined wealth in the US past the $100 trillion mark for the first time. Across the country, the median home price has risen 40% over the last five years and continues to climb.

Despite all of this housing inventory levels are low which is containing home sales. The other issue is declining affordability. Renters feel squeezed out of the market as home prices are rising faster than incomes and interest rates keep climbing. That said, renters are also feeling the squeeze as rents in Columbus are rising

Real estate data firm RealPage Inc. pegged Columbus one of 10 markets in the United States where rent rose the fastest in the second quarter of the year, with annual rent here rising by 3.5%, well above the national rent growth of 2.3%. HotPads, an affiliate of Zillow, indicated in its own report that rents in Central Ohio are growing fastest in one- and two-bedroom rentals. Renters looking at a one-bedroom rental can expect to pay an average of $975 a month, which is up 4% from a year ago.

New apartment construction tends to focus on studios and one-bedrooms, so the additional supply of smaller units has eased price pressures in that market segment in those area with lighter demand. That said, renters looking for an apartment or home – should expect faster rent growth in the years ahead this as mortgage interest rates continue to rise resulting in higher mortgage payments and shifting the Rent vs Buy Equation (Is It Better to Rent or Buy?) allowing landlords to more aggressively increase rents as the alternative of purchasing a home becomes more expensive.

* TIP – Even though demand generally holds up through late summer, by August or September, there’s a tendency for landlords to position rents more conservatively in order to fill as many units as possible before the seasonal slowdown in leasing begins.

Back to housing, there’s an early indicator that the market may be starting to shift. At the start of summer, 14.2% of listings nationwide had their prices reduced, according to a new report by Zillow. This was especially pronounced in the upper tier of the market. At the beginning of the year, 13% had cuts, and at the close of 2016, 11.7% were lowered. The increase between January and June is the largest on record in the report, and doubled the jump in the same six months in 2017. 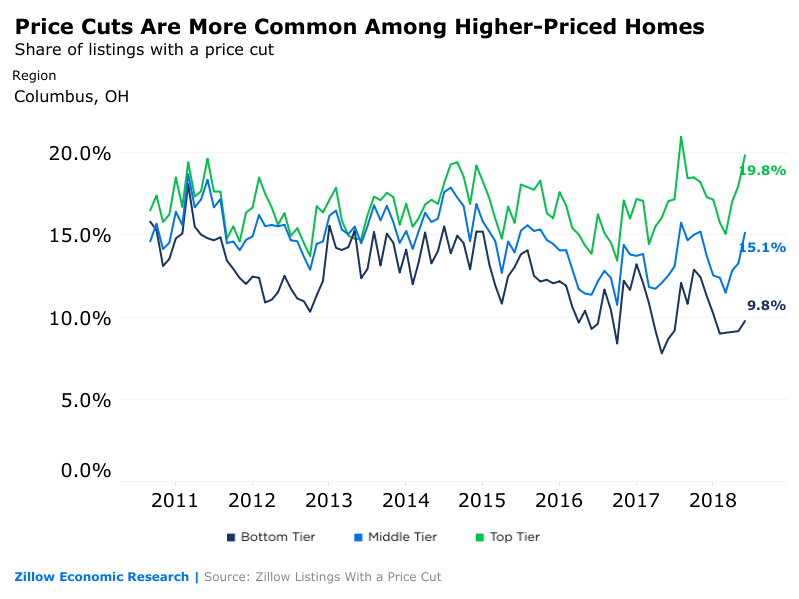 The upper tier of the market is often a leading indicator for the housing market in general. While the market has been tilted sharply in favor of sellers over the past few years, early signs are hinting that the winds may be starting to shift ever-so-slightly. While it’s certainly far to soon to call this a buyer’s these data indicate the market may be shifting.